Women’s and mother role in Tanzania

Together for more Girlpower! The female role in Tanzania

In Tanzanian society the role of women is very conservative and patriarchal. The man is the undisputed head of the family and directs the fate of the individual family members. Also his wife is subordinated to him, although she takes over many duties. In the African tribe of Massai, for example, the woman carries the burdens of everyday life. She takes care of the children, cooks, collects firewood and milks the animals. The construction of the hut and the supply of water also falls within the woman’s sphere of responsibility. They often have to walk to distant water points.

The foundation stone for this subordinate role is already laid in childhood, when boys are clearly preferred. If there is not enough money to send all children to the (private) school, the choice falls on the boy of the family. If a girl becomes pregnant during school time, she will be excluded from school. Since they are not allowed to resume school education, they are denied the most basic building block for a self-determined future.

If girls become unintentionally pregnant, they usually have only their families to support them. Many, however, no longer have a family or are rejected. Overburdened with the situation of a single parent, some young mothers leave their children behind. Also some children in the Hope Home share this fate.

Forced marriage and violence against women

Especially young women from poorer families are often forced to marry as soon as they become sexually mature. The bride’s family receives a bride price for her daughter, for example in the form of several goats or cattle. Two girls in the Hope Home were also on the verge of a forced marriage before finding refuge in the Hope Home. In the marriage – regardless of whether it was entered voluntarily or not – there is also frequent violence against women by the husbands, sometimes even rape.

In order to improve the position of women in Tanzania, the women’s organisation UWT (Vereinigte Frauen Tanzanias) has existed since 1962. Education and health programmes are designed to promote women. In addition, women are to be considered in the further economic, political and cultural development of the country.

Also we of Weltherz.e.V. would like to contribute a part to strengthen the role of the women in Tanzania and to give them protection. That is why we have consciously included in our future project: the construction of a children’s house and women’s house/advice centre. 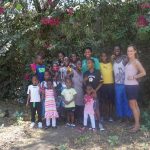